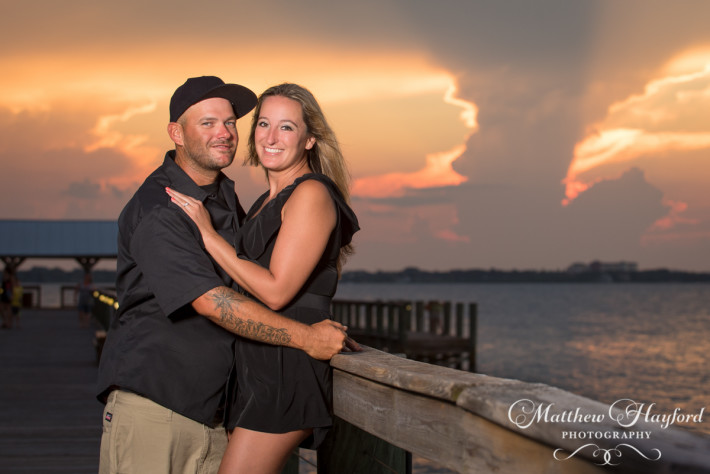 by admin
/ in Engagements
0 Comments

You just can’t beat being an engagement photographer in Melbourne Florida because you get the best of both worlds.  On one hand you can shoot at the beach all year long and get the beautiful blue skies and crashing waves.  On the other hand you can go down to the river and see some of the most gorgeous sunsets you have ever seen!  The only thing that would make it better is by adding a beautiful couple right in the middle.  I usually try to start the engagement sessions later in the afternoons over on the beach.  Usually, the crowds have already gone home and the sun is still bright and the skies are still rich in color.  The session is designed to be fun and stress free, where they can be themselves with the one they love most.  I like to show off their personalities a bit and help create memories that they won’t forget.  As the session goes on we eventually get into the golden hour where I like to play with the light in order to get some unique effects, such as backlighting the couple and making them glow.  Eventually, before the sun goes down, we pack up and head over to the river so that we can catch the sunset.  Over there, we will shoot until we are all bit up by mosquitos or it becomes too dark.  Below is a sneak peek of some of my favorites so far from Melissa and Jake’s engagement session just the other day!  They were an awesome couple to work with!  However at first, I could tell Jake wasn’t too sure about taking pictures.  He’s a big fisherman so I’m sure he would have rather been fishing, but he was a complete natural once we got warmed up!  Melissa didn’t have to work very hard either.  She’s a complete natural as well and her beautiful smile could light up a room!  The sunset we got was fantastic, as it almost resembled an atomic bomb of beautiful color exploding in the background!  I’m looking forward to their wedding in the Spring of 2016 which will be at Up the Creek Farms!